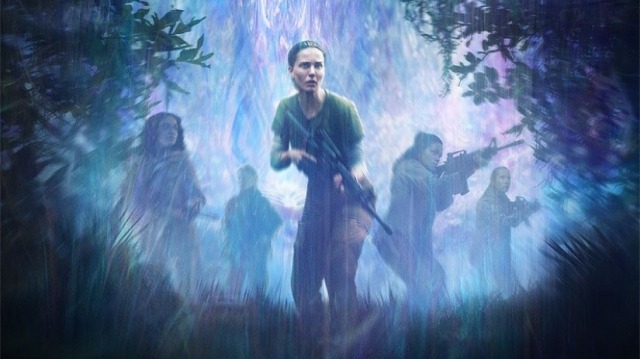 Annihilation is a 2018 science fiction horror film written and directed by Alex Garland that is based on a Novel of the same name by Jeff VanderMeer. The film stars Natalie Portman, Jennifer Jason Leigh, Gina Rodriguez, Tessa Thompson, Tuva Novotny, and Oscar Isaac, and follows a group of military scientists who enter “The Shimmer,” a mysterious quarantined zone that is full of mutating landscapes and creatures.

The movie was an interesting in it self,  however was slow in the beginning, so if you don’t pay attention you wont understand what is going on. Not much is explained in the beginning except that you find out that Natalie’s character Lena is a professor of cellular biology at Johns Hopkins and her husband was missing after he went on a military mission. The movie cuts in and out of Lena being at home and being in quarantine. The quarantine takes place after Lena and her crew military scientists entered “The Shimmer” and undergo a series of trials and tribulations while they were on their way to the source of “The Shimmer” The entity that had apparently caused the now called “Area X” over the course of three years caused that part of the earth to terraform all biological life. While the team was inside “The Shimmer” their communications to the base was scrambled leaving them unable to communicate. They were apparently inside the shimmer for months even though to the team it felt like a week. Lena was the only crew member that survived the expedition and it is believed that she was effected by being inside the shimmer on a biological level. Her other crew members either went mentally ill, or was killed by mutated creatures.

The movie gets creepy towards the end when you watch Lena reach the light house and discover what happened to her husband inside on a almost dead video camera.

Annihilation is a movie that you can either wait for it to come out on DVD later, its not a major block buster film however it is a movie to go see if you are into science fiction thrillers.

Here is the trailer for Annihilation, and you can see it in theaters now.

Original Theme Music - Philosophy On Life, The Universe And Everything...