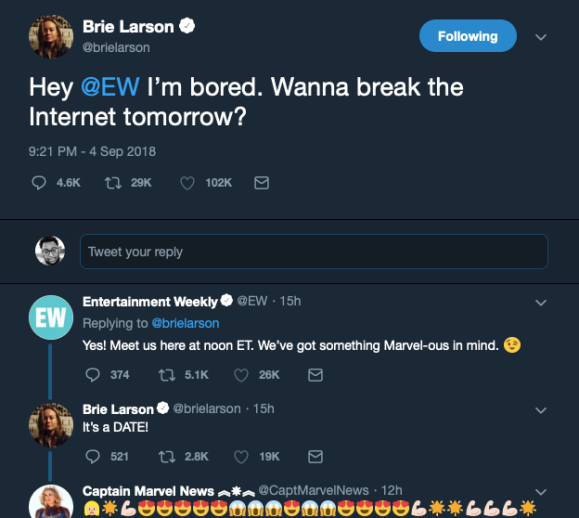 The tweet spread quickly, and we received news that the “Captain Marvel” movie update will hit the internet at 12 noon EST.

Marvel and movie fans across the world waited patiently till the exclusive look at Marvel Studios first 2019 film Captain Marvel hit the internet via Entertainment Weekly.

Here are some of the exclusive photos that they shared with us and we couldn’t be more excited!!

When Captain Marvel hits theaters March 8th 2019. (International Woman’s Day!) It will be the 21st entry into the MCU, and a first ever solo female superhero move in the MCU. Carol Danvers aka Captain Marvel is part Kree and part-human pilot who made her comics debut back in 1968.

Brie Larson says in an interview with EW about her superhero character. “She can’t help but be herself,”  “She can be aggressive, and she can have a temper, and she can be a little invasive and in your face. She’s also quick to jump to things, which makes her amazing in battle because she’s the first one out there and doesn’t always wait for orders. But the [not] waiting for orders is, to some, a character flaw.”

Captain Marvel takes place in the 90’s, long before Steve Rogers was thawed out and Tony built his first suit. Carol ends up caught between a intergalactic war between two alien races, the Kree and the Skull.

Marvel Studio President, Kevin Feigie stated that the movie used Terminator 2 as inspiration for some of the fight scenes and 90’s homage.

The big question I have is why was Carol gone for so long?

Its my theory that at the end of Captain Marvel, Carol decides to go help protect the universe and leaves earth, giving Nick Fury the tricked out pager we see at the end of the post credit scene in Infinity War, should he need it, he would use it to alert Carol to come back.

My other question slash theory is why didn’t Nick use it to call Carol to help stop Loki’s invasion on New York. Did he lose it,? Was it locked away in a hidden shield facility? Did someone else give him the pager later after the events of Ultron? Remember, Shield was infiltrated with Hydra operatives, during Winter Soldier, so many loyal Shield Agents were undercover. There were only a small collection of Shield agents who were still loyal to Shield. Phil Coulson became the Director in ABC’s Agents of Shield. Maybe Phil gave the pager to Nick at some point?

Still no official teaser trailer yet, but these images will hold us over until that is released. My guess is that we will get a teaser trailer before the end of September. 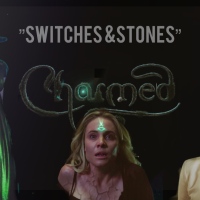